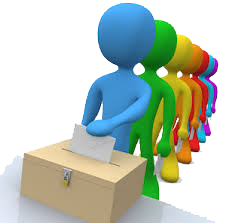 It’s that time of year again where we elect officers for the upcoming year. At this time we would like to know if you are Willing To Serve as either President, Vice President, Secretary, Treasurer, or Board of Directors.

If you are Willing To Serve and meet the qualifications of sections 4.2.3 and 4.3.1 of the by-laws, please submit the form below. Submitting this form does not mean you are being nominated. It simply provides a list of willing servants that can be nominated by the club.

4.2 ELECTION AND TERMS OF OFFICE
4.2.1) Officers and Board of Directors members described in these by-laws shall be elected annually at the regularly scheduled Club meeting. The terms of the Officers shall be for one (1) year and those of the Directors shall be for three (3) years from January 1 through December 31. One (1) of the three (3) Directors’ positions shall expire each year. The Director’s terms shall be staggered in such a manner that one Director will be replaced each election cycle.
4.2.2) Officers and Board of Directors may only serve in one Club office during a Club fiscal year.
4.2.3) Only one member of an immediate family may serve on the executive board at the same time.
Immediate family is defined for the purpose of these bylaws as parents, spouse and siblings.

4.3 NOMINATIONS
4.3.1) Nominees for officers must be members of the Club in good standing and possessing voting rights. To be nominated as an Officer of Club, a person must have been a voting member of the Club for one (1) full year prior to nomination. To be nominated as a Director, a person must have served as an Officer of the club or be a voting member of Club for three (3) full years prior to nomination.
4.3.2) Club Nominations and election procedures shall be supervised and conducted by the Election Committee at a regular club meeting. When nominated, seconded and accepted, the candidate shall be added to the slate of nominees.
4.3.3) Club Nominations and club elections will not occur at the same club meeting except in the case of a club vacant officer position.

4.4 ELECTION PROCEDURES
4.4.1) Election Committee shall supervise the election during the club meeting.
4.4.2) Balloting shall be by secret written ballot.
4.4.3) Candidate shall be elected to an office or a Directors seat by a simple majority of votes cast.
4.4.4) Election Committee shall count ballot votes cast at election and shall inform presiding Club Officer and members present at club election meeting the results of the club elections.
4.4.5) Election results shall be printed in next available issue of Club meeting minutes and newsletter.
4.4.6) Election Committee chairperson shall retain all ballots for 30 days following Club election.
4.4.7) Elected Officers and Board of Directors member shall take office January 1 in accordance with these by-laws.
4.4.8) Election Committee will endeavor to insure the club will have two club members in good standing as nominees for each club office on the ballot.